The Journey of Baltic Conference Series

In the past decade, the International Association of Advanced Materials has been working continuously to ignite more and more awareness about the highly expanding field of advanced material science, engineering, and technology.  There are different brands of events and conferences that IAAM has created as it understands that the scientific community around the world requires a global interactive platforms and forums to keep moving forward and develop according to the requirements of the modern times. In order to fulfil this need, the International Association of Advanced Materials serves the materials world by organizing a wide range of events and conferences. With the help of these events and conferences, IAAM has been a game-changer for the sphere of Materials Science, Engineering and Technology. The events that International Association of Advanced Materials organizes are designed keeping in mind an agenda and aim. One such event is the Baltic Conference Series.

The major fields of study that have been discussed in the Baltic Conference Series so far are: Plastic and Rubber Technology, Carbon Materials & Technology, Wood Technology, Water Technology, Chemical Technology, Medical Technology, and more. The conferences organized in BCS are designed to highlight all the advances in the scientific world with a clear focus on new innovations and discoveries that empower the materials science world. With elements like notable personalities, plenary and keynote lectures, oral and poster presentations, and many more, BCS is a one stop destination for highly informative session and discussions.

In the past, there have been several successful assemblies organized as part of the Baltic Conference Series.

Eminent experts and speakers from Academia and Industry joined the rich legacy of “Advancements of Nanotechnology to Market”.

Baltic Conference Series was initiated in the year 2017. The first assembly of the BCS was organized by IAAM from 08 to 11 October 2017 in Sweden. This first BCS conference was aimed at facilitating discussions regarding all the most recent progresses and trends of advancement of nanomaterials and several other interdisciplinary fields. The congress presented a balanced amalgamation of different fields such as Sensors & Actuators, Biosensors & Bioelectronics, Microfluidics and Nanofluidics, Nanomaterials and Nanotechnology, Nanomedicine, Tissue Engineering and Healthcare Technology, etc.

This first assembly of BCS provided a global forum for researchers, educators, technocrats, students, engineers, medical and clinical professionals working in different fields to present their research results, innovations, products, and ideas. The assembly was a huge success as it received as many as 500 abstracts from 32 countries all around the world.

The conference paved the way for the following assemblies of Baltic Conference Series and created abundant opportunities for researchers around the world to make global networks and have healthy discussions with other leading researchers, scientists, professionals, from different parts of the world. The first BCS proved to be an amazing success.

An international consortium on spin-off ideas opened with world-class panellists.

IAAM organized the second assembly of the Baltic Conference Series from 14 to 17 May 2018 in the city of Stockholm, Sweden. The assembly was aimed at giving all the attendees including experts from around the world, students, professionals, and researchers a chance to be a part of the world of new-age technology. This four-day international event presented an co-ordination between different interdisciplinary fields of study such as: Carbon Materials & Technology, Pulp & Paper Technology, Epoxy and Rasins, Plastics and Rubber Technology, Wood Technology, etc.

The conference presented a highly prestigious and renowned platform to professionals working in these interdisciplinary fields and  allowed them to present their research results, innovations, breakthrough ideas, activities, and products.

Because of excellent elements like speakers from academia and industry, highly informative lectures, etc., this second assembly of BCS received abstracts from 47 countries all over the world. The conference covered the full span of various interdisciplinary fields and ran with as many as 10 parallel sessions. These 10 sessions included as many as 8 keynote talks, 27 invited lectures, 32 oral presentations, 13 poster presentations, and the welcome and IAAM Felicitation ceremony. The conference also included international symposia and allowed the delegates to explore the interdisciplinary connections with areas of new age energy materials and technology. The conference also gave the delegates a chance to know more about the Nobel Prize and visit Nobel museum in the Stockholm 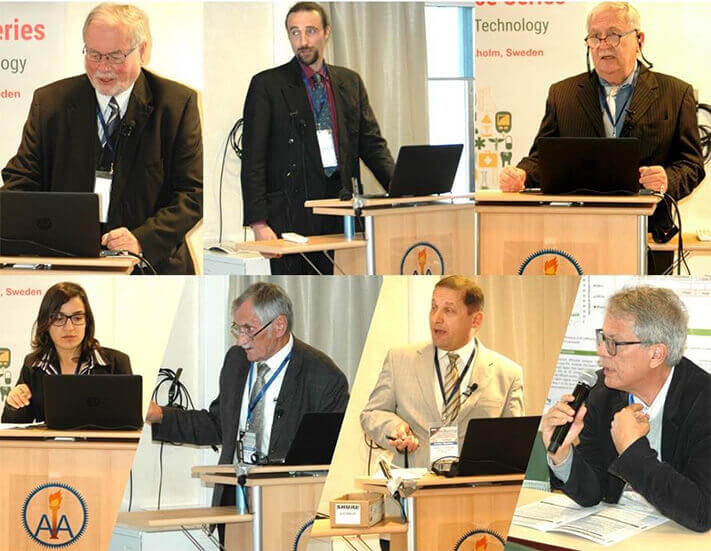 Novel Innovation and Technology Session Speakers during the BCS.

The congress was graced by the presence of delegates from as many as 47 countries. The 2nd BCS proved to be an amazing success and achieved all its objectives.

The 3rd congress of the Baltic Conference Series was the International Conference on Nanomaterials & Nanotechnology (ICNANO) and Drug Delivery & Nanomedicine (ICDDN). This assembly was organized by the International Association of Advanced Materials from 09 to 12 October 2018 in the city of Stockholm, Sweden. The conference was organized to provide a global platform for discussing the recent trends of advancement of nanomaterials and nanotechnology along with a deep insight of drug delivery and nanomedicine, especially in the field of translational research, innovations, and technology for market. This assembly of BCS was organized in an attempt to find the solutions to all the challenges that are being faced in the healthcare and nano-industry by trying to bridging the gap between medical research and nanotechnology. The theme of the conference was “A substantial move towards the medical innovations and nanotechnology”.

Distinguished speakers from Academia and Industry joined the rich legacy of BCS.

The conference was an amazing success as it received approximately abstracts from as many as 46 countries from all over the world. This prestigious conference ran with as many as 23 sessions that included 15 keynote lectures, 73 invited lectures, a series of oral and poster presentations, and IAAM felicitation ceremony. These sessions included different presentations delivered by eminent researchers and scientists. These lectures encompassed discussions on different interdisciplinary fields such as semiconductor materials, Nanobiomaterials and Devices, Semiconductor Materials, Cancer: Causes, Prevention, and Treatment, Nanotechnology for Healthcare, Energy, and Environment, Next Generation Nanoscale Materials, New Frontiers in Nanotechnology, Synthesis and Characterization of Nanomaterials, Drug Delivery Research and Modelling, Nanomedicine, Nanoscale Horizon, Advanced Medical Research, etc.

Keeping in line with the tradition of the Baltic Conference Series, IAAM utilized the IAAM felicitation ceremony to honour several deserving scientists and researchers.  In this ceremony, IAAM honoured Dr. Dipak Maity from Institute of Chemical Technology, India, with the Young Innovator Award.  The association also honoured several individuals with IAAM Scientist Medals, IAAM Medals, and Young Scientist Medals. The association also awarded Professor Marc Brunel from University of Rouen, France, and Dr. Giovanna Paolone from University of Verona, Italy, with the prestigious IAAM Scientist Medal. Dr. Olga Shimoni from University of Technology, Australia, Dr. Raquel Ovalle from LINTEC of America, And Dr. Hong Jin from Xi’an Jiaotong University, China, were awarded with the Young Scientist Medal as a result of their exciting and innovative research in the field.

The conference was highly successful and managed to achieve all the objectives that it had set out for. It explored the recent developments and discoveries that had taken place in the field of nanotechnology along with medical research.

The 4th and latest edition of the Baltic Conference Series was organized from 14 to 16 May 2019 in the city of Stockholm, Sweden. The theme set by IAAM for the conference was “A substantial move towards the commercialization of Translational Research to Market”. The assembly was organized by the International Association of Advanced Materials to create multiple opportunities for highlighting the progresses and advances in the transition of research into results and products that can benefit the end-users directly and can make their lives better.

The 4th BCS was a truly global event as it was graced by the presence of delegates from as many as 31 countries from across the globe. The congress ran with as many as 10 sessions that included a number of keynote talks, invited lectures, a series of oral & poster presentations, and the IAAM felicitation ceremony.

The 4th BCS have connected the ideas from the eminent speakers and high-quality research presentations leading to global networking, while enjoying cruise hospitality and social activities in two capital cities, along with the allusion of the beautiful views of Baltic Sea and Stockholm archipelago having nearly 30,000 islands, islets, and rocks.

IAAM has always believed in commending the scientists and young technocrats to inspire them to bring innovative technology at the doorstep of social empowerment. The 26th IAAM felicitation ceremony was held on 16th May 2019. The aim of the IAAM felicitation ceremony was to recognize as well as reward the innovative ideas of researchers, scientists, and technocrats and motivate them to progress in their respective research areas.

Poster Presentations during the BCS.

During the congress, a poster session was also organized on the theme: “Novel innovations and Technology”. This session was very useful as it highlighted the recent research, innovation, and technology of the interdisciplinary areas of materials and chemical technology.

Guest of honors conveys to the panelists in the international consortium on spin-off ideas during 4th BCS.

The 4th BCS was a premier success and proved to be a prestigious platform where the scientific elites from all over the world came together to discuss the most recent innovations, trends, concerns, and challenges as well as solutions adopted in various scientific fields for achieving global excellence.

BCS provides dedicated time for the delegates to explore the Scandinavian culture, food, historical monuments, etc. It has also provided a great opportunity to spend more time with colleagues and to exchange new ideas from the conference with the enjoyment of the natural beauty of Scandinavia.

Cultural and Social activity at two Scandinavian capitals (Helsinki & Stockholm). Scandinavian culture is unique and during 2nd and 3rd day evening, as part of the conference program, the delegates were offered a special taste of Scandinavia.

Over these past few years, the franchise of the Baltic Conference Series has been a highly successful edition of IAAM’s flagship event, the Advanced Materials Congress. The BCS has really helped IAAM move forward with its agenda of facilitating discussion-oriented events and platforms. International Association of Advanced Materials hopes to organize many more assemblies of the Baltic Conference Series in the future and keep serving the Materials Science community.

Your email address will not be published. Required fields are marked *

Business organizations need to collaborate with their peers for various purposes. IAAM Business Council proves to highly instrumental in facilitating this process. With the vibrant network of materials scientists and researchers that the International Association of Advanced Materials has weaved over the years, its Business Council is quite competent to facilitate collaborations with materials scientists comprehensively. As a member of the council, your company or organization gets access to all the resources that are required to achieve progress in the world of science.

Business organizations need to collaborate with their peers for various purposes. IAAM Business Council proves to highly instrumental in facilitating this process. With the vibrant network of materials scientists and researchers that the International Association of Advanced Materials has weaved over the years, its Business Council is quite competent to facilitate collaborations with materials scientists comprehensively. As a member of the council, your company or organization gets access to all the resources that are required to achieve progress in the world of science.